There is an afterlife.

If it sounds like I’m saying that with too much confidence, it’s because I’m not talking about people.

I’m talking about reviews – specifically on Google Plus and Yelp, the two sites where it’s most important but hardest for most “local” business owners to get reviews.

What’s the big difference between those two ultra-important sites and others?  It’s that reviews don’t simply travel from the typing fingers of your customers, to your business listing, to the eyes of potential new customers.

Somewhere along the way, they can disappear because of Google’s or Yelp’s infamous review filters.

What happens to a review once the anti-spam filter mafia works it over?  Does it swim with the fishes?  Is it gagged and tied to a chair in a dingy basement, held captive until you meet certain demands?  Will it be freed?  What can you or others do to free it?

I’ve got some thoughts on those points, and so do Mike Blumenthal and Darren Shaw.

Those two guys were kind enough to share some excellent insights (as you’ll see).

You know some of your reviews have been filtered if your customers are the only ones who can see their reviews on your page.

Let’s say you asked Bob, a customer, for a review.  You know for a fact he went to the right listing, signed into his Google Plus account, and wrote you a review.  If he’s the only one who sees the review on your business page – if nobody else can see Bob’s review – then you know it’s been filtered.

If Bob signs out of his Google account, even he won’t see it on your page any longer.  Bob is in a séance with the ghost of the review, made possible by the hocus pocus that is Google Plus.

Where is the filtered review floating around?  Mike Blumenthal has some insight on that:

Google has not been totally transparent about their review filtering. In other words they have been totally opaque about the rules and technologies that they are using.

Reviews are kept in a separate index and not with the basic business data. This allows them to remove or move individual reviews. In the past there were also issues where some reviews were lost, misplaced or otherwise missing that didn’t involve their filter. So sometimes it was difficult to know whether they had just “misplaced” a review or had “misjudged” it.

I think most of those problems have been put behind them so at this point if they are not showing up (but do show under the author) then they are being filtered by the filtering algo.

Assuming that a review is visible under the author then if it were ever to be unfiltered by a human at Google. Google can now also move reviews from one business listing to another. These both mean that Google has obviously developed internal tools to allow support staff to this which they never had before.

It’s possible for the review to come back.  It may return to your page – exactly where you and your customer wanted it to go – if Google relaxes its filtering algorithm.  This happened in January of 2013, after about 7 months of draconian filters that sent far too many innocent reviews to the gallows.  It was a great feeling to see many of my clients’ legitimate and hard-earned reviews reappear on their Google listings.

But is there anything you or your customer can do to resurrect your reviews?  I’ve never seen it done, and it doesn’t sound as though Mike thinks it’s doable:

Given that we do not know all of the parameters that cause a review to be filtered we don’t really know and can’t easily test if any given review can be unfiltered in some way. The review filter, unlike Yelp’s, seems more complicated and layered. If that is the case and Google scores multiple attributes of any given review it would seem that it would be unlikely that they could be surfaced by user activities. Possible but unlikely.

So, aside from wait and hope that Google later recognizes that your reviews were legit all along, what can you do?  I think all you can do is the following:

Then copy and paste a sentence or two of the review text into Google, and see what comes up in the search results.  It may be the case that Google accidentally stuck the review onto someone else’s listing, in which case you may be able to get it moved to where it belongs.

Don’t give up.  Google reviews are never truly dead, as I’ve noticed, and as Mike explains:

Nothing at Google is ever thrown away. Not a listing, not reviews, not anything.

You can’t really even delete a listing. If Google thinks a listing should be shown that you have “deleted” in the dashboard they will show it. Only by “closing” a listing can you make it inactive.

Reviews are the same. They never go away and the system is always looking for a listing to attach them to.

However now that 1) they can unmerge listings and 2) move reviews around it is possible to get reviews off of one listing and onto another if they are there inappropriately.

The “afterlife” of Yelp reviews isn’t nearly as mysterious.

They rest securely in Yelp’s “filtered reviews” section.  Like Egyptian mummies, Lenin, or poor cryogenically frozen Ted Williams, they can be seen by humans.

Not all visitors are allowed in the mausoleum: 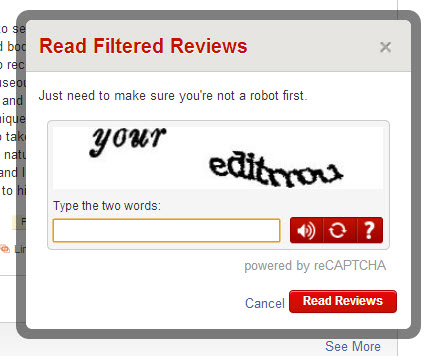 I’ve learned over time that reviews on Yelp get filtered out based on reviewers’ activity – or, more specifically, their inactivity – rather than on what they write.  I’ve seen Yelp both filter and allow reviews that are short, long, helpful, lousy, full of keywords, devoid of keywords – you name it.  I’ve seen helpful, appropriate reviews get filtered, and I’ve seen raunchy ones go through.

What Yelp seems to look at, above all, is how active a Yelper the reviewer is.  If your customer goes onto your listing, gives you 5 stars and a review, leaves, and isn’t already in the habit or doesn’t get in the habit of writing reviews on Yelp regularly, his or her review probably will never see the light of day.  The reviews of first-timers are marked for death.

What can you do if your reviews have been filtered?  Can you rouse them back to life?  Well, it depends on how close you are with your customers.  You can’t do it alone.  Here’s Darren Shaw’s advice

As far as I know, the key to unfiltering Yelp reviews is to engage the reviewer. Many reviews get filtered because the reviewer created an account, left a review, then didn’t use the site again. Yelp trusts reviews from its active users more than the inactive ones, so “activate” that reviewer. Friend them. Respond to their review. “Like” their review. Send them a message through Yelp. Encourage them to review other businesses on Yelp. With a bit of activity, we’ve seen reviews raise from the dead on Yelp.

One tip I’ve wanted to share is how to find people you know on Yelp. I discovered that this google search can help:

(Try it on yourself)

Now imagine you have a database of customers, and you check them all with this search. You could put a little “flag” on their account and have your staff let them know you’re on Yelp the next time they come in.

Reviews on Yelp weave in and out of life.  As Darren says, the variable that determines whether they stay on terra firma is how active the user is.  Even if a review is unfiltered, it can get filtered again if the reviewer goes inactive for more than about 3 weeks.  I’ve personally seen it happen to reviews that I’ve  written for businesses I frequent.  Yelp reviews can die off and be resurrected more than once.  There’s not just one afterlife for them.  They can always go “poof” or rematerialize, depending mostly on whether the reviews come someone who’s part of or becoming part of Yelp’s “community.”

Pretty much all reviews benefit your business – a little or a lot.  Here’s my geeky way of thinking about their value to you:

Last but not least…thanks to Mike and to Darren for their great insights!