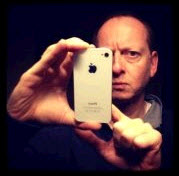 How should Apple Maps fit into your plan to get visible to more customers in local search?

Read on and you’ll get some answers from Andrew Shotland – the guy behind Local SEO Guide and the Apple Maps marketing expert.

I had a great talk with Andrew about aMaps earlier this month at SMX West, where he did a great presentation on our “Local” panel.

I’d had some aMaps-related questions floating in my head for some time.

So naturally, I informed him that 10 unicorns would die unless he answered all of my questions in a full-blown interview.

He said, “Let the unicorns go.  It’s my knowledge of Apple Maps you want.”

Phil:  Apple Maps has kind of sucked so far.  Why should anyone use it now – as opposed to using it only once it’s improved and matured?

Andrew:  I have heard a lot of horror stories, but lately I haven’t found it to be too bad.  I find myself switching between it and the Google Maps app all of the time.  They both have their pluses and minuses.  The case for using Apple Maps now is that if you are on iOS 6.0 or above, you are going to use them whether you think they suck or not.  Apple Maps is the default mapping application for pretty much any location-based iOS app.  I think there are a few hundred thousand of those.  And there are a few hundred million people who have access to them.

Phil:  Eventually Apple will get good and more-complete local maps data.  Then what happens?

Andrew:  Any maps service will never be complete, but you’re right.  Maps are too important to the mobile/digital world for Apple to not get them at least 75% right.  I think it’s inevitable that at some point Apple launches its own version of a dashboard where businesses can claim and manage their listings.  That said, Apple’s top priority seems to be consumers – remember, Apple’s primary business model is to sell things to you, not to sell you to advertisers – so I think they are going to spend most of their effort making Apple Maps as useful as possible and will likely skimp on the b2b features.  Sounds familiar right?  So as for what happens – expect plenty of bitching and moaning by guys like me about how Apple doesn’t care about small businesses.  And expect a lot of glitches like we are seeing with Google+ Local.  So expect a lot of opportunity for guys like me and you to help those poor souls who rely on these mapping systems to get found by potential customers. 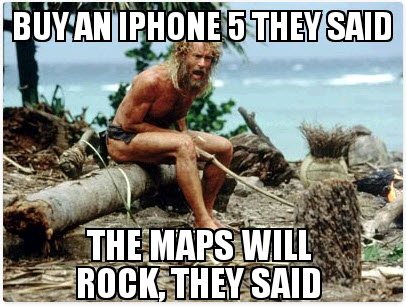 Phil:  What promise or potential do you think Apple Maps holds that Google+Local doesn’t?

Andrew:  The big difference I am anticipating is that Google+ Local will be a more closed system in that it will be designed to promote use of Google+ Local.  When I think about what Apple Maps could become, the first thing that comes to mind is that it’s in Apple’s interest to promote using of iOS not Ping (remember that turkey?).  This means that Apple Maps could become “app aware,” meaning that the map app would know what other apps you use and when using the map, could pull in info from Facebook, Foursquare, Twitter, Instagram, etc.  That would be kind of cool.  And Apple Maps is a much better name than Google+ Local, don’t you think?

[Umm, yeah.  The name “Google+Local” is up there with the jump to conclusions mat.]

Phil:  Do you think Apple will force Google to get its “local” act together over time – out of competitive pressure?

Andrew:  Per my general skepticism of businesses being a high priority for Apple Maps, I don’t see Apple forcing Google to get its act together any time soon.  Apple will force Google to continually iterate on the consumer side of things which will be great, but again businesses will probably be pushed to the back of the bus.

Phil:  How do you think Apple will try to monetize Maps (other than indirectly, by maybe giving people fewer reasons to get Android phones)?

Andrew:  If we take the “What would Steve Do?” approach, ads suck.  The last thing the Apple Maps guys want is an ad on their beautiful creation.  And I think for now there’s enough profit in the iOS ecosystem to treat Apple Maps as a cost-center that supports everything else.  Offers/coupons seems like it could be a user-benefit thing that could pop-up in the Maps, but if I were an Apple engineer, I probably would make it a very obvious opt-in feature.  Though it would be cool if Siri could tell you when you’re driving by a Jack in The Box that she has a deal on a Big Mess.

Phil:  The business listings in Apple Maps are really sparse; not much on the page.  Do you think it will stay that way?

Andrew:  At some point businesses will get to control what goes into these listings and they will contain more data like offers, videos, etc, but I expect the design to remain very Jony Ivesian, whatever that means. 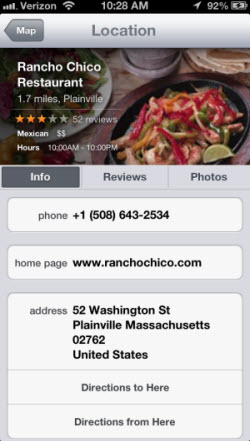 Phil:  Yelp reviews are a huge factor in Apple’s local rankings, as you know.  What strategy (if any) should business owners follow for scaring up Yelp reviews?

Andrew:  You are the master of that one Phil.  Just add a link to your how to get reviews infographic 🙂  The important thing to keep in mind is that your Apple Maps profile shows the most recent three Yelp reviews, so make sure the last three customers left with a smile.

Phil:  To what extent does Apple Maps dovetail with the enterprise SEO work you do?

Andrew:  Since I launched AppleMapsMarketing.com, I have received a lot of requests for help from all over the world to fix bad/missing data issues for multi-location businesses as well as single-locations.  A lot of agencies have contacted me because they are starting to see demand from their clients and they don’t know what to do. I recently got contacted by a big Dunkin Donuts chain in South America.  Unfortunately I couldn’t help them, because Apple Maps doesn’t show business listings in the countries they are in.  I am keeping a list of those countries at Countries Where Apple Maps is Closed For Business – it’s pretty sparse now, but I add to it as I have time to research.

Phil:  How has your opinion of Apple Maps changed since it was released?

Andrew:  It hasn’t really.  Ultimately it’s irrelevant how good the service is in the short term.  In the long term, I expect Apple Maps to be either the #1 or #2 most important service in local search.  That’s why I am spending time figuring it out now.

Phil:  What should the “little guy” be doing now, in terms of paying attention to Apple Maps?  How about bigger businesses?

Andrew:  These posts contain most of what you need to know at the moment.  I update them as I figure out new stuff, but if readers figure out anything new, I invite them to share it in the comments and we’ll throw you a nice fat juicy link as a thank-you:

How to Add Your Business Listing To Apple Maps

Phil:  Do you think Apple Maps has – or should have – any bearing on what a business owner’s overall local SEO strategy should be? In other words, is it a game-changer, or simply a big piece in the local-visibility puzzle?

Andrew:  The puzzle thing.  I wouldn’t spend much time thinking about Apple Maps SEO at the moment. The fact that the primary interface is a mobile map that presents listings based on your precise location means that traditional rankings are not as relevant.  You need to think about categorization and make sure your data is correct, but at the moment there’s not a lot you can do to get to #1 for whatever search besides have a lot of 5-star Yelp reviews.

Andrew:  As you can tell from my other blog, Local SEO Guide, I got pretty bored writing about Google.  There are plenty of other smart people getting into the minutiae of Google+ Local – Mike Blumenthal, Linda Buquet, Mike Ramsey, Nyagoslav Zhekov, to name but a few.  The reason I started Local SEO Guide was because at the time, nobody was talking about local SEO and I thought I had some things of interest to talk about.  I started Apple Maps Marketing for the same reason.

As far as what I like about Apple Maps so far – it has helped me illustrate to clients how investing a little bit of effort into writing quality content and promoting it can get you ranked on page one of Google for what is likely one of the most competitive keywords on the planet.  I doubt many people are actively optimizing to rank for “Apple Maps”, but given how many news stories there are from major and minor media, I am still amazed that about half the time my blog with my stinking avatar shows up on page one.

Phil:  What are some tests you’re currently running?

Andrew:  Right now I am trying to determine the fastest way to get an update into Apple Maps.

Phil:  If Steve Jobs could descend from the misty ether and answer any 3 questions you had about Maps, what would you ask him?

– Did you really die or did you actually upload your consciousness into iCloud?
– Do you now agree that Walter Isaacson was the wrong guy?
– What did you think of the tap dancing kid at the Samsung Galaxy 4 extravaganza?

Did you really think I was going to use my precious time with afterlife Steve talking about mapping?

Andrew:  Chip…in…Head…Full on LTE to the brain with turn-by-turn navigation voices in your head.  Updates may cause headaches, eye strain and leakage of clear fluid from the nostrils.  If SIRI keeps telling you to “turn in 500 feet” for more than four hours straight, consult your technician.