Google recently added the following to their seldom-enforced list of preferences policies on Google Maps reviews:

The basic meaning seems clear enough: Google doesn’t want you to cherry-pick reviews.  Fine.  Got it.

But what’s Google’s definition of “discouraging or prohibiting” a negative review or “selectively soliciting” a positive review?  Have you done either of those things without realizing it?  Is Google only trying to scare the serious offenders and put everyone else (like you) on alert?

Joy Hawkins did a helpful post about Google’s “review-gating” policy.  Here is her take on what Google now tells us not to do:

The only trouble is other review-encouragement practices may or may not be in the crosshairs of Google’s new policy.  You can interpret “don’t discourage or prohibit negative reviews or selectively solicit positive reviews from customers” in a few other ways.  You could hamstring your effort on reviews unnecessarily, or you could do something Google doesn’t want you to. 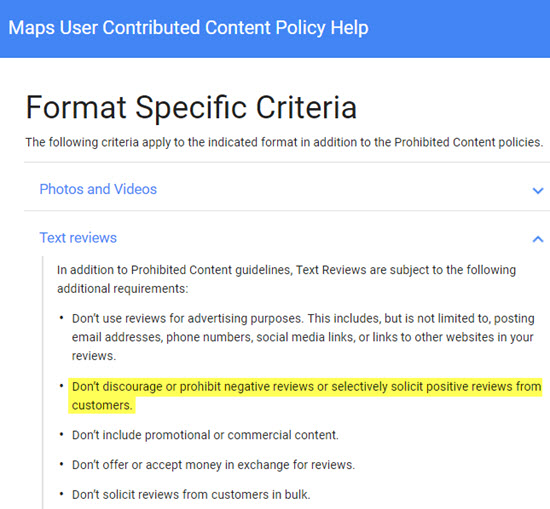 Interpretation 1: “We don’t care if you only approach happy-ish customers for Google reviews, and we don’t even care exactly how you ask, just as long as you constantly make it clear that customers can leave you a negative review if they feel the need.”

Interpretation 2: “We don’t care whom you ask for Google reviews, but you’d better not fixate on their star ratings or what they say in the reviews.  So that means don’t be like the hotel that fined guests for leaving bad reviews, don’t tell customers things like, ‘If we haven’t earned your 5-star review yet, please contact us first’, and don’t use review funnels.”

Here’s the harshest interpretation of it:

Interpretation 3: “Ask all customers for reviews, or ask none at all. Don’t let your knowledge of a customer’s happiness influence whether you ask him or her for a review.  If you do ask for a review, pretend there’s no such thing as a ‘negative’ review, a ‘positive’ review, or star ratings.”

Here’s what I think Google means:

Interpretation 4: “We’re obligated to tell you that you shouldn’t ‘selectively solicit’ or ‘discourage or prohibit’ reviews.  We’re smart enough to define those terms more clearly for you, but we’d rather leave it open to interpretation.  That’ll deter some people, and it’ll spook software makers into enforcing our policies for us, and it lets us change our definitions however we want.”

Google long has left its review guidelines and other guidelines mushy (or obscure), apparently by design.  Google’s policies, enforcement SOPs, and internal politics change all the time.  Why wouldn’t they keep their options open?

For many years I’ve urged clients and others not to put words in customers’ mouths, not to fixate on 5 stars, and always to seek honest feedback.  It’s possible to try too hard to avoid bad reviews.  In doing so you miss out on many of the benefits of reviews in general.

But if you learn customers have gripes, it’s only reasonable to try to work out any problems first.  That’s what they hope and expect you’ll do.  They know full well that they can leave you a bad review at any time.  I suspect the Google Maps powers-that-be would agree, but on the off-chance they don’t, let’s see them try to do something about it.  As David Baxter said over at the Local Search Forum, “It’s about deterrence.”

How do you interpret Google’s latest mushy “policy” language?

Does it change your strategy in any way?

Any possible readings I missed?