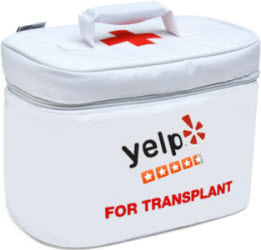 Yelp reviews aren’t something you want to lose, if you can help it.  Under what circumstances can you get Yelp to move, transfer, or transplant your reviews from one business listing to another?

Darren Shaw and I were wondering about that the other day.  The answer wasn’t in Yelp’s FAQ (or anywhere else), either.  So I contacted Yelp to ask:

Can a business owner (or anyone else) request for Yelp reviews to be moved / transferred to another listing?  And if so, under what circumstances might Yelp be able to move the reviews?

The scenario I’m thinking of is if a business has two duplicate listings on Yelp and each one has 5 reviews.  It would be a shame to lose those 5 reviews, so can the business owner get the reviews on Listing A transferred to Listing B – if they’re truly for the same business and location?

If there happen to be duplicate listings of the same business, whether there are reviews on each listing or not, our team will merge the listings and all content will be combined. So, if there were 5 reviews in each listing before, once merged, the new, single listing would then have 10 reviews.

So getting your reviews transferred sounds like a pretty hands-free process on the part of you, the business owner – if and when Yelp finds listings.  But I’ve seen duplicates and near-duplicates stick around on Yelp for a year-plus, so Yelp’s finding the rogue listings spontaneously might be a big “if.”

My suggestion: if your reviews are being spread thin by duplicate or near-duplicate listings, don’t just wait around for Yelp to discover and merge the listings.  Report those listings sooner rather than later.

Yesterday the one and only Mike Blumenthal wrote a dead-on post about the TARFU situation that is Google+Local – which he aptly calls a “train wreck.”

Some of the lowlights he touched on included:

1.  The fact that Google hasn’t made it clear what’s happening to the old Google Places “Dashboard” or even whether the Google+ backed will become the only place you go to manage your Google listing(s).

2.  The recurring rash of “We currently do not support this location” error messages.

3.  Google’s failure to communicate what’s next­ – like when we can expect the transition to Google+ to be (somewhat) complete or when Google will allow businesses with many locations to integrate their Google+ for Business pages.

I agree with everything Mike said in that post…with one exception: A “train wreck” implies unmitigated disaster.  What’s going on with Google+Local doesn’t quite qualify as one of those, in my opinion.

Rather, I’d say that the problems in Google+Local are – in at least one strange way – good for business.  The problems provide a swift kick in the pants to pay attention to other parts of your online local visibility.

If have been or are rightly afraid of wrangling with Google’s shortcomings and bugs (some of which are more like Starship Troopers -type giant insects), you have a little more impetus to do things like:

Yes, Google needs to get its act together sooner or later (or else eventually fewer people will use it and Google won’t make as much dinero from ads).

Yes, Google’s mismanagement can hurt real businesses – maybe yours – run by real people who need to bring home the bacon.

No, it’s not always fair.

Trust me, I know.  I wrangle with Google all day long.  I know how frustrating it is.

But I also know that if (for example) my rankings for this website went “poof” tomorrow, I’d still get plenty of new clients and plenty of people would still read my posts.

That’s partly because I focused on the “other stuff” literally years before I had any good rankings, or even a halfway decent website (a brief history of that here, in case you’re interested).

All of those “other” items I mentioned (above) are things I try to help many of my clients do, both before and after they get good Google rankings.

The fact is that any time you depend on any one way to get the phone to ring, you’re taking a risk.  Whether it’s Google+Local, or pay-per-click ads, or word-of-mouth.

I like to think of the blind samurai Zatoichi, from the films of the same name.  He’s blind, but all his other senses are so heightened that his sneaky, murderous foes don’t stand a chance.  His profound badassery wouldn’t exist without his blindness.

You absolutely should push to get visible in local Google.  But my point is you don’t want to push all your poker chips into it.

By the way, many of the to-do items I mentioned are key factors in your Google visibility anyway.  To the extent Google is “working” for you now – and certainly once you’ve gotten past whatever problems that have you down at the moment – those steps are likely to help your Google+Local rankings.

But regardless of how well Google is functioning, if you spend more time on the stuff you can completely control, you will get you in front of more local customers.

Scroll up, take a look at that list, and see how many items you can start knocking off today.