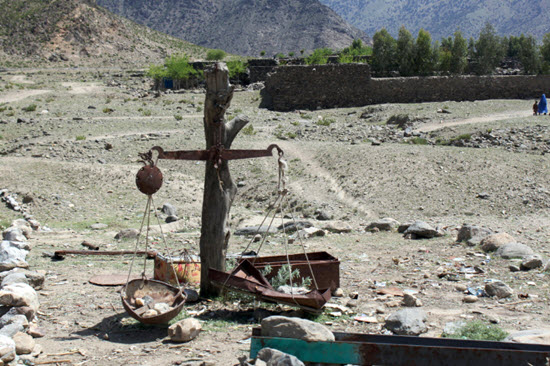 Fighting competitors’ spam in Google Maps is an unpredictable, mushy part of local SEO, and it requires the patience of a monk.  Competitors ethical and unethical come and go, their rankings bob up and down, and Google flip-flops on policies, enforcement, and safeguards.  The least-predictable part of all is: what happens to the anti-spam “edits” you submit to Google in your attempt to clean up the map?

That depends.  An edit is not an edit.  You can make many kinds of anti-spam edits on Google Maps.  Whether Google rejects or accepts yours depends on the specific type of edit you make, on the particulars of the business in question, and on your history of submitting edits that Google ends up accepting.

Most Google Maps edits (or other requests) you can make are more likely to be approved if the business’s Google My Business page is unclaimed, if you’re a mid-to-high-level “Local Guide,” or if the page you’re trying to edit has a checkered past.  It also helps if your edits are based on the truth and you make them in good faith, rather than in an effort to hurt competitors who play fair and square.

Still, in fighting Mapspam there’s always a “I wonder what this button does?” component, which you probably want to avoid as much as you can. 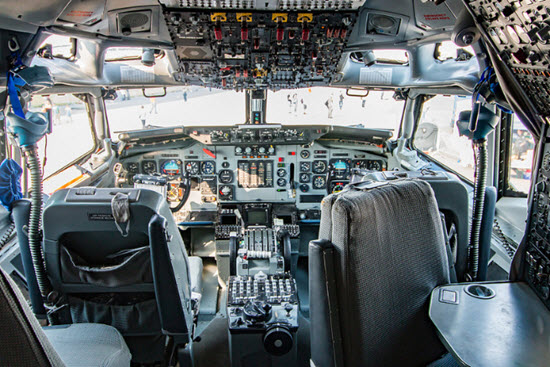 You’re more likely to get some of the results you want if you know where your patience is most likely and least likely to pay off.  I’ve observed a few things, based on many hours of making anti-spam edits on behalf of clients and businesses I’ve encountered in the wild.  My observations are based strictly on my experience. Here’s a breakdown of the different kinds of Google Maps anti-spam edits, and the general likelihood that each will stick:

Edits Google is most likely to approve

Remove a stuffed-in keyword from the “business name” field.

If a keyword or search term is not part of a business’s real name, and that’s obvious to you, there’s a good chance Google will agree. 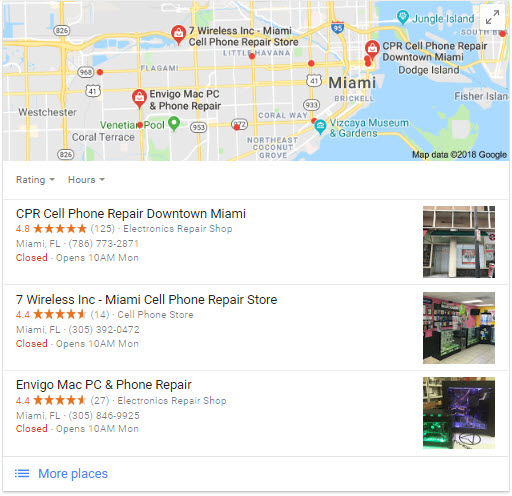 Remove a stuffed-in city/place name from the “business name” field.
As with extraneous keywords / search terms in the name, you can probably get Google to remove the city name or other place name if it’s clearly tacked-on.

Remove a pile of keywords and/or place names from the “business name.”
Sometimes it’s obvious which part of the business name is “real.”  Often the spammy competitor will put the real business name first, and stick a bunch of keywords and maybe city names after it – perhaps separated by a dash or similar character.

Remove a listing so spammy it could serve only as a lead-gen method for a “real” business.
If its name is an exact-match search term, and it’s got an exact-match domain name, and especially if the address is elusive or hard to find or you can’t pull up its business license, there’s a good chance it’s a lead-gen listing for a “real” business.  You may not know which competitor that is unless you call (and pretend to be a customer).  Just the same, Google may approve your request to remove the listing. 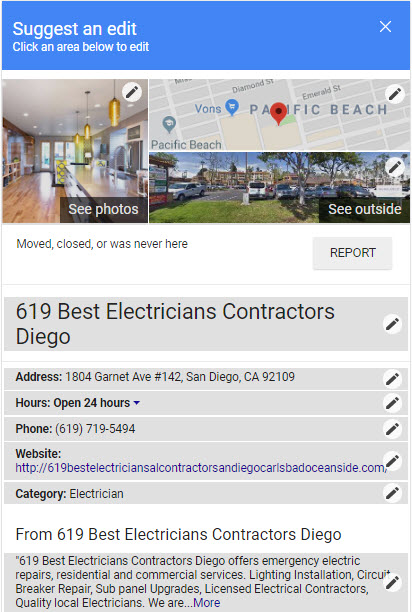 Change the site URL or landing page URL field.
Not an edit you’d need to make often.  Probably the most likely scenario is your competitor puts his/her Facebook page URL or other third-party URL in the “website” field.  (That’s an old way to game the Maps rankings, and it’s against Google’s “quality guidelines.”)

Flag down a negative review of your business from a non-customer.
Only expect Google to do something if the text of the review makes it clear the reviewer is a competitor (rare), or if it’s very un-PC, or if the reviewer has a fishy pattern of reviewing other businesses in your industry.  Getting other people to flag down the review seems to help get Google’s attention.

Mark a business as “Permanently closed”
This one’s murky.  I don’t know how* Google would corroborate or reject a claim that a business has closed.  I’d be tempted to say it depends on how many other people flag a business as “permanently closed,” if not for the fact that Google often approves that kind of edit instantly after I make it. 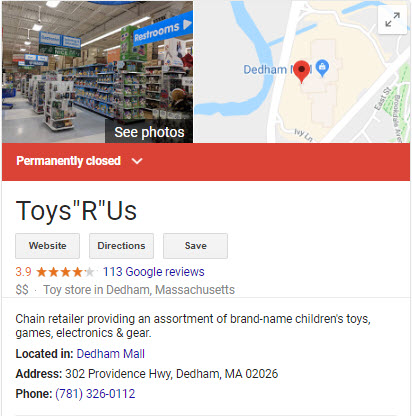 Flag down irrelevant or inappropriate photos.
This is a rare time you can give Google specific details as to why you want the photo(s) removed.  Perhaps that’s why, on the relatively few occasions I’ve reported photos, Google’s pretty good about removing them. 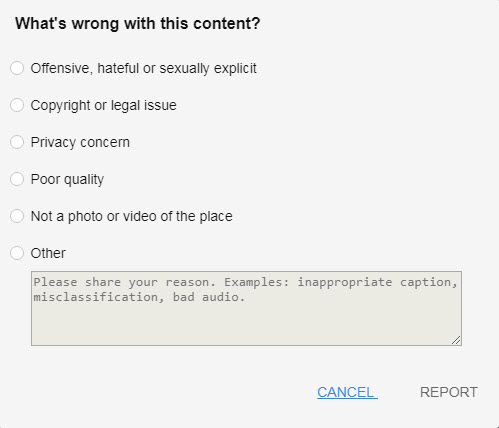 Edit the “business name” field significantly, or change it completely.
Even if the name is complete BS, Google seems to consider complete name-changes major surgery, and usually won’t approve your edit right away.  Whether Google ends up approving it at all (days or weeks later) is a coin-toss.

Remove stuffed-in keywords or city/place names from the “business name” field when online branding is consistent.
If it doesn’t appear to be a pure lead-gen listing for a “real” business (see earlier point), getting the name fixed is a tough putt.  In my experience, it works out that way even if the name used on Google My Business differs somewhat from the name on the business’s license.  Probably the best time to escalate your request at the forum.

Remove a fake/questionable ratings-only review of your business.
Unless the reviewer has a pattern of crooked behavior, Google  probably will leave the rating up.

Remove a fake/questionable ratings-only review of competitor’s business
This one’s the inverse of the situation I just described: that 5-star rating of your competitor’s business probably will stand, unless the same reviewer left negative ratings of other businesses in the same line of work (like yours).  You can see the other businesses someone reviewed or rated by clicking on his or her username in the review.

Remove a listing at an ineligible address (e.g. employee’s home, UPS store, virtual office, etc.)
Google has all kinds of rules on the addresses you should and should not use, but does little to enforce those rules.  Unless you can upload a photo that makes it plain as day to the uninterested stiff at Google that your competitor is not at his/her stated address, that listing will probably stick.

Move map pin.
I can’t remember the last time I needed to move a map pin, so I can’t say how likely Google is to accept that kind of edit. 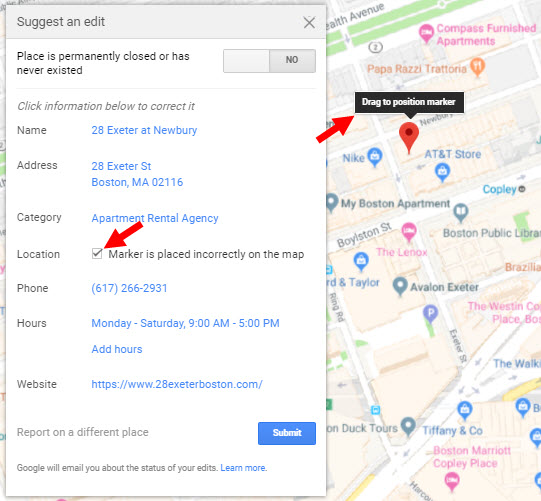 Change categories.
Because most business owners get the categories basically correct, because you can only choose from a list (and not specify custom categories anymore), and because Google often “fixes” the categories automatically, very rarely do I ever suggest a different category.  Don’t remember what happened the last time I did, so I’d appreciate any fresh intel on this one.

25 Hard Truths of Google Reviews – me

Interview with Bryan Seely: Google Maps Spam Fighter and Ethical Hacker for the Little Guy – me

Local SEO Spam Tactics Are Working: How You Can Fight Back – Casey Meraz / Moz

The Largest Review Spam Network Ever or…Who Is Shazedur Rahman and Why Should You Care? – Mike Blumenthal

Spam in, Garbage out – Why Google’s Recent Paper on Map Spam Is Flawed – Mike Blumenthal

Any types of edits I missed?

What’s been your success with different types of edits?

What about the types of edits I couldn’t remark on?