A couple days ago, Colan of Imprezzio Marketing reported that the next-to-useless “Report a problem” feature in Google Places had been revamped.  I was excited.

After all, Google made it easier to specify what problems a listing has, which in theory makes it easier for Google to clean up the local results.

My excitement was premature.  In the wee hours last night – when only muggers and cats are awake – I flagged down a Google Places page that belongs to a dentist who’s no longer practicing at that location.

80 minutes later my edit was rejected.  It used to take the stiffs at Google a whole day to make a bad decision.  I guess on one level I appreciate the speedy verdict.

So I tried another angle – which maybe I should have tried from the get-go.  I told them the name of the page isn’t compliant with Google’s new rules (which it isn’t): 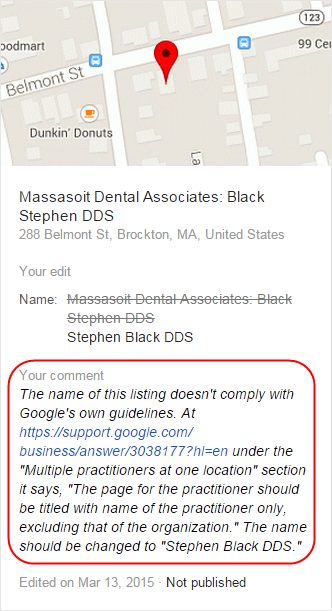 Two-and-a-half hours later they rejected the edit.  Even though I cited Google’s own guidelines to explain why the name of the listing needed to change.

Sure, Google has made the “Report a Problem” interface nicer, but the real problem remains: Google’s crowdsourcing approach to quality-control has failed.  Legitimate edits and reports don’t get approved.

Between Google’s doubling-down on outsourcing “support” and its recent shortening of those call-center hours, there’s little reason to believe Google will get serious about data-quality any time soon.