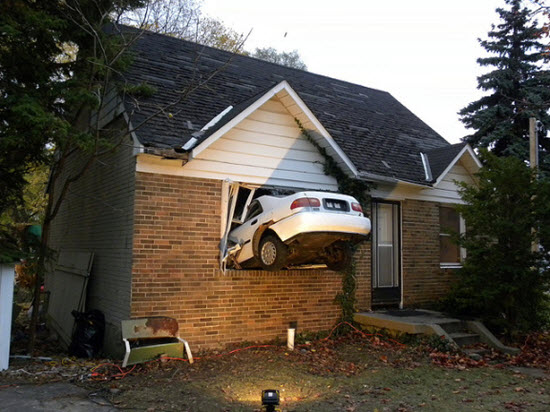 One week or less, from what I’ve seen.

A 7-Eleven opened nearby last year, but Yelp didn’t have a page for that location.  The locally-owned convenience store that used to be at that location had and still has a Yelp page.  (Nobody’s reported it as closed, and Yelp hasn’t de-duped.)  But the 7-Eleven didn’t have one for 9-10 months after opening.

I guess their SEO person is grazing in tidier pastures.

Anyway, I took it upon myself to submit a Yelp page for 7-Eleven, as I do from time to time.  I’m not big on convenience stores, and I’m even less big on pro bono enterprise local SEO, but my grand act was borne of curiosity: I had occasion to look up the hours.  Recently, a drunk guy crossed the street to ask if I knew how late the 7-Eleven was open.  I told Otis 11pm sounded right, but that I didn’t know for sure.  I looked it up when I got back from my stroll.  Turns out Google My Business didn’t have the hours, so I checked Yelp, which also didn’t have the hours.

On June 11th I created a Yelp page for 7-Eleven (minus the hours).  When I checked it on June 18th, a week later, it ranked #4 for a brand-name search. (It probably ranked on page 1 even sooner than that.  Wish I’d checked.) 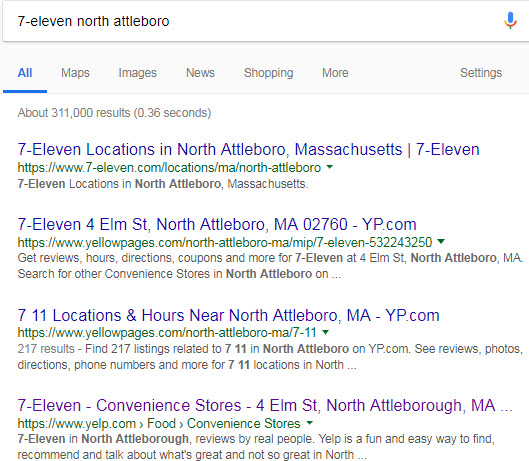 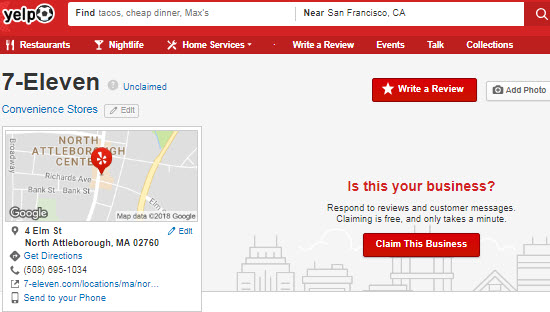 So what?  Well, I suggest you patrol Yelp occasionally for “unofficial,” unclaimed, in many cases user-submitted (or competitor-planted) pages for your business.  You may or may not want that page, and it may or may not make your business look good, and it probably will be mighty visible when people search for you by name.

Keep an eye on competitors’ Yelp pages, too.  Those may rank well, even for competitive search terms, but you can probably get them removed or fixed without too much heartache.