The Google Places layout has changed a lot recently: gray map pins, “preview” arrows for each Places page, and a re-orientated local map that follows you as you scroll down the page.

Much ink has been spilled over these changes.  Even people who don’t follow Google Places closely know about the new layout.

But there’s a change that nobody (to my knowledge) has discussed so far: the little “Feedback” link.

What “Feedback” link?  Type in a local search term, hover your mouse over any of the Google Places business results, and then hover over the little arrow that pops up on the right. 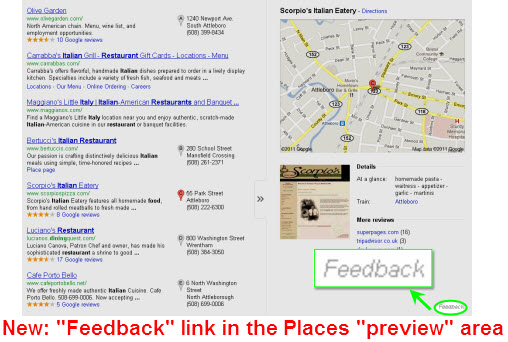 Way below the big map and the newly prominent Places page info, you’ll see a small, grayed-out link that says “Feedback.”  If you click on it, the “Report a problem” window will come up, and you’ll be able to report mischief to Google.

What’s new (and strange) is the link itself and the way it’s been incorporated into the new Google Places layout.  (Yes, it’s only for Google Places, because the “previews” for organic search results don’t include “Feedback” links.)

Specifically, what’s weird is how subtle this “Feedback” link is.  It’s tiny.  It’s gray.  You only see it when you hover on a local search result and then on a preview arrow.  For something that’s now accessible from page 1 of Google, it’s awfully inconspicuous.

It’s a contradictory change: it’s more prominent—you can now see it without leaving Page One—but it’s not downright prominent.  Google isn’t known for its subtlety, or for being afraid to stick its new features in your face.

So why is it only a little easier now for people to “report a problem” with a business in Google Places?

One possibility is that Google is starting to make an effort to clean up phony / spammy / inaccurate Google Places listings and info—with the help of Good Samaritans and business owners who are getting screwed by inaccurate and/or fraudulent listings.  The folks at Mountain View know that Places is the Wild West; the only question is to what extent they’ll send a sheriff or two into the local saloons.

Given Google’s recent stabs at quality-control (in the form of “automatic updates”) and its growing emphasis on user-generated content, it’s possible Google is now paying a little more attention to reports of problems.

So…if there are any inaccuracies / spammy Google Places listings in your local market, give the “Feedback” link a try; there’s a chance Google will actually listen.