Lots of companies want to be the place customers turn to when searching for local businesses.  It’s a battle a between Google on one side, and every other search engine and major directory on the other side.

Greg Sterling recently said it’s between Google and Yelp – that they’re like Spain and Portugal back in the day: empires dividing up the world.  Professor Maps said it’s more like the US versus the Taliban.

I’d say the situation is that Yelp has made itself indispensable.  It’s at the center of a gang-up on Google that includes Apple Maps, Bing Places, Yahoo Local, and YellowPages.  They’re only small compared to Google.

These 5 Big Boys exchange reviews, business data, now ads, and presumably money.  They do it to get more local search “mindshare,” and ultimately more ad revenue.

Their relationships to each other and to Google are messy.  They’re easier to draw.  So I thought I’d map out the turf-war over the local map: 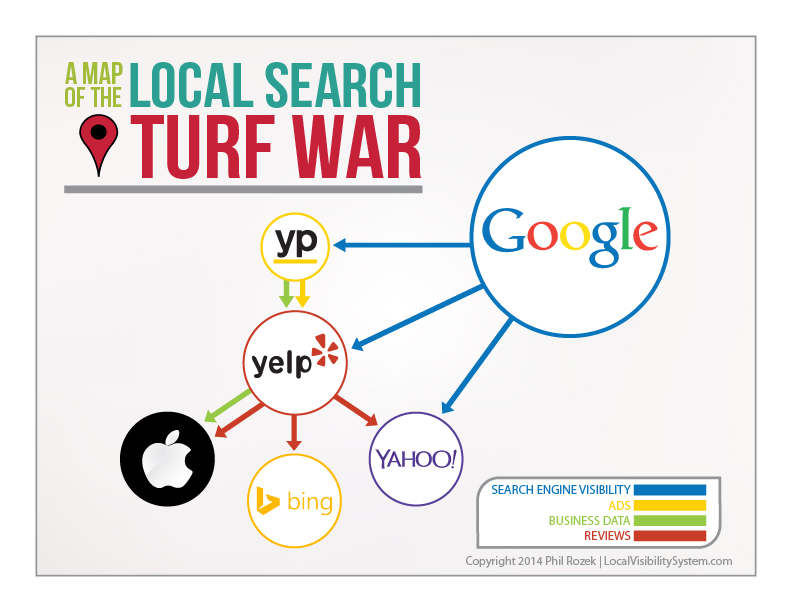 It’s a rough sketch.  There are other big players in local search, like the CityGrid network.  But none that’s ganged up on Google – at least that I can think of.

Quick explanation of the arrows:

Yelp also feeds business data to Apple Maps.  (I almost forgot this point when drawing the doodle; thanks to Darren Shaw for reminding me.)

YP has just entered into a deal with Yelp in which its ads show up on Yelp, and some of its data on local businesses is fed to Yelp.

Bing and Yahoo share organic results and ads, of course.  But I’m not aware of any union they have in “local.”

Here’s the kicker: Yelp, YP, and to some extent Yahoo depend on Google for survival.  Yelp in particular has organic rankings in Google out the wazoo.  Most people who go to those 3 sites come from Google.

Google can’t just squash these guys.  YP and Yahoo consistently show up highly in the organic results because of the size of their directories, and because they’re old, more or less trusted sites.  And Yelp is a destination.  Rarely can Google not show Yelp.

What does all this mean for your local-visibility strategy?

Practical Lesson 1:  Yelp may not be profitable (even after 10 years), but I can’t see them going away.  They’ve made themselves indispensable with the (relatively) high quality of their reviews.  You don’t have to like Yelp.  But you can’t ignore your presence / reputation there.  Well, you can, but that’s not smart.  They’re the glue holding the other 4 big players together – against Google.

Practical Lesson 2:  Start worrying about your Yelp rankings, if you’re not already

Practical Lesson 4:  Don’t totally ignore YP.  Not a good idea to begin with, because it’s an influential site.  I’m not saying you should pay them for ads.  For now, just give your listing(s) a good tune-up.

Practical Lesson 5:  Get serious about Google+ reviews.  As I’ve written, Google has been pushing reviews hard, partly to squeeze out Yelp (so that Yelp isn’t the de facto place to read reviews).  For a while it’s been in Google’s interest to make them more rewarding for you, and that will be even truer as time goes on.

How has this “gang-up” against Google affected your visibility strategy?

Has it influenced the way you’re trying to “Google-proof” your business – or has it made you focus even harder on Google Places?

P.S.  Thanks to design dude David Deering for another great graphic.